Lone Ones by Leonard Kamhout is a private custom jewelry atelier founded in 1994 by Leonard Kamhout and Devon Wheeler, with its headquarter in Los Angeles California. Prior to creating his first signature collection, Leonard was known and recognized as the original designer & co-founder of Chrome Hearts.

In 1994 having been awarded the prestigious CFDA award for accessories, Leonard would fall in love and move to France to initiate the & look for his first solo collection, Mating Flight. A total departure from his previous biker niche this collection was the evolution of his prior work under the CH label.

It would be three years of dedication before the market would come to know the man behind just the brand, although once revealed, it would immediately cause a huge impact, with fans lining up in the streets of Japan for the chance to buy their custom hardware. 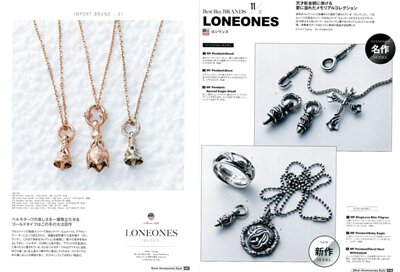 The early days of Mating Flight were ignited by the endorsements of many Japanese stylist and celebs, most notably Takuya Kimura, who famously dropped the iconic silk link bracelet into a glass of whisky in 2001 the Kiss & Flow collection was released. This was followed in 2010 by the launch of the Basic Nature collection.

Lone Ones has enjoyed a celebrity following internationally with the likes of Leonardo Dicaprio, Eric Clapton, Ozzy Osborne, Madona, but has its largest profile in Japan where you can find its flagship stores in Tokyo as well as Osaka. In 2013, the brand continues and represents the very top level of silver luxury chic jewelry and accessories.